The more I learn about Archimedes, the more I think what an incredible person he must have been. I’m working on new titles to add to my Mega Minds series, about amazing thinkers and inventors of Science, Technology and Maths STEM. It’s very hard to judge across the centuries who is the most amazing Mega-mind. Newton said, “If I have seen further than others, it is by standing on the shoulders of giants,” by which he meant that his predecessors had already worked out the principles upon which he could build new ideas. In time, Einstein would stand on Newton’s shoulders and so on. Archimedes had few shoulders to stand on, so he truly was an original thinker and his ideas and, more than that,  inventions were amazingly wide-ranging. I’m planning to add to my Mega-Minds series with other great STEM innovators. I remember spending a day in the science lab at a girl’s school. The walls were covered with posters of great scientists – all of them men. I was surprised. How were the girls’ to be inspired and feel that science was for them too, if there was not even a Marie Curie poster on the wall? I have a host of Mega-minds I’d like to write about and a good number of them are women, you’ll be pleased to hear but, for me, Archimedes has to be THE MAN!

Pandora - How Curious Are You? 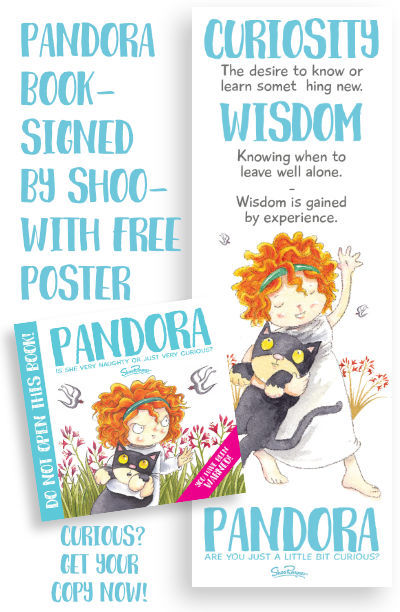 Pandora is my latest picture book which was successfully launched through crowd-funding on Kickstarter.

A fresh, new telling of an ancient story.

How curious are you?

Will Pandora enter the room at the end of the long, dark corridor and open the box inside?

Will you open the book? Do you dare!?

This book contains a sensible message for younger readers - That it is almost always best to mind your own business!

But might there be a different message for older readers? ...that sometimes we need to stick our noses in when something just doesn't seem right.

Ask Shoo to sign this book specially for you or someone you know.

Let me read it to you in this video:

It comes with a gorgeous, 594mm tall, inspirational poster to remind you to be wise as well as curious!

Choose the name of the person you would like me to sign this book for - usually their first name.

I can't wait to send this book to you. It took me twenty years, with so many changes and edits, to finally write and illustrate it!

It's wonderful to finally hold it in my hands.

Save this product for later
Did you like this post? Why not join Shoo on Patreon and get so much more!

I am an Amazon affiliate. By following Amazon links on this website you will be helping me maintain the site. I receive a referral fee but you will not be charged any extra by Amazon. Many thanks.

We use cookies to ensure that we give you the best experience on our website. If you continue to use this site we will assume that you are happy with it.Ok